RESEARCH INITIATIVES  -  WE ARE OUT THERE! 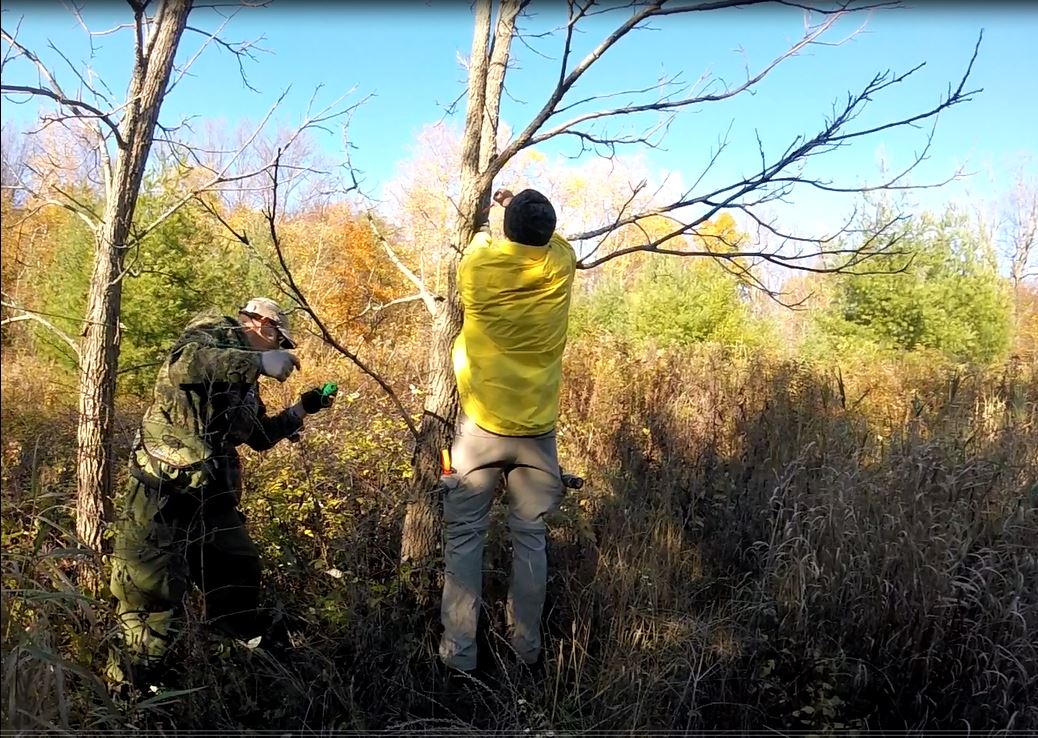 A couple audio clips recently captured during an overnight excursion. Audio recordings can be some of the best evidence that we are able to capture in the field.       (  Best listened to with headphones on  )
S O B TM members donate their energies to conduct methodical investigations to assemble evidence to persuade the scientific community to authenticate Bigfoot as a species. S O B TM members continuously strive to locate, isolate and monitor the most suitable Bigfoot habitat and travel corridors within our investigative area of interest.

The most prevalent indicators that suggest the presence of Bigfoot in a particular area are structures and other manipulations of the forest environment, specifically those that cannot be readily attributable to weather events or the actions of humans. Tracks are the most direct evidence supporting the presence of this biped in a particular area. All these indicators are found throughout North America. Frequently, these indications are found in areas of reported sightings. While not clear proof of causation, the frequency of pairing, suggests a direct correlation.

Perhaps the most interesting facet of the physical evidence Sasquatch are suspected of leaving behind is how consistent it is across vast geographic areas. On many occasions S O B investigators have seen strikingly similar tree structures, blinds or patterns in how naturally occurring objects are physically manipulated in both isolated tracts of land and public spaces adjacent to large centres of population. A quick search online will reveal an increasing trend in the number of individuals and land owners not only recognizing these subtle physical signs but documenting them and in many cases sharing their discoveries. Physical clues discovered in Texas will likely be very similar to those discovered in central Ontario or Alberta.

It is where these indicators come together geographically that we concentrate our efforts.

S O B TM like other Bigfoot research organizations employs Google Earth as a primary research tool for locating and defining locations likely worthy of investigation. We then correlate these sites against a database of existing S O B/OWFR reports to determine areas of highest probability as in the map below, at which point we will plan field excursions to these locations accordingly to search for signs of habitation or passage.

Below is a useful link to a video published by WNY Bigfoot
https://www.youtube.com/watch?v=KGthZUbsFNY
It offers some useful tips in how to utilize Google Earth in your research initiatives. These techniques are comparable to those used by S O B TM 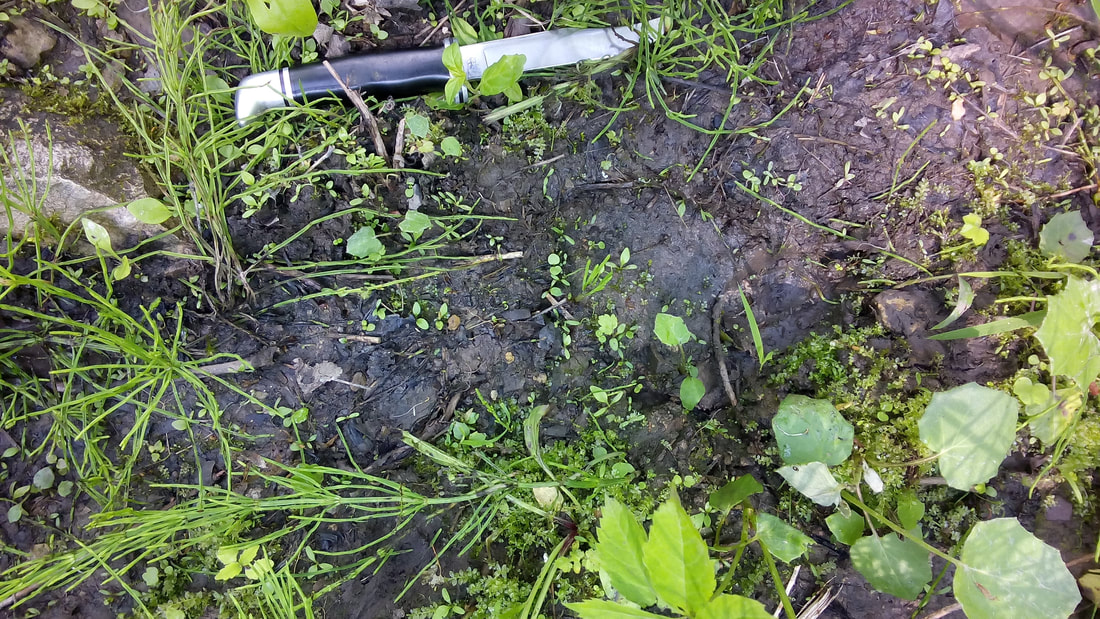 S O B TM continues to conduct investigative field work on a continual basis and invites/encourages all S O B members to participate in assisting with any site visitation. Our success is reliant on the dedication of our members and the equipment we use.

S O B TM is currently acquiring unique camera systems which will be deployed to discreetly monitor suspected seasonal travel corridors. Some of these corridors have a prior history of reports while others in the immediate area have shown signs indicative of Bigfoot activity.
Numerous S O B TM  visitations to these corridor sites have produced consistent indicators of passage and offer
S O B TM  a very good opportunity to capture compelling if not definitive video/audio evidence of the animals presence in the area.

S O B TM also deploys and monitors numerous trail cameras and audio recorders in and around suspected habitation sites/travel corridors within Southern Ontario, Canada. We currently have a number of investigative sites we work and visit on a regular basis in an effort to continue to document and collect evidence of Bigfoot activity. We are striving to build on relationships with local conservation authorities and property owners adjacent to areas of interest to educate them, to gain further insight and to gain access to the best site locations.

S O B TM has recently acquired additional GPS and 4K camera equipment which we will be incorporating into our research initiatives and will hopefully afford us the ability to track the movements of Bigfoot potentially in real time. The advancement of high tech, highly portable gear will continue to allow us to push the envelope with respect to our Bigfoot research initiatives within Ontario.

1.  Research local elk/dear herd migrations, and go to where they are currently located.

2.  Make sure to go where there are also abundant voles, raccoons, squirrels, and other herbivores/omnivores. (Basically a thriving ecosystem with multiple food sources.)

3.  Make sure the area can and currently does support large carnivorous mammals, whether bears, wolves, or coyotes.

4.  Make sure there are at least 5 fresh water lakes or large fresh water ponds within a 2-8 kilometer radius.

5.  Search for fresh water springs, preferably more than one within a 2-8 kilometer radius. Search for something you yourself could use as a water source.

6.  Make sure there are plenty of edible plants in the area, which are currently sustaining other large omnivores, like bears.

7.  Make sure that the area also has several rivers with healthy working ecosystems abundant with fish, beavers, muskrats, grouse, etc.

8.  Look for areas where hunting is prohibited, unlikely, or generally inconvenient for one reason or another.

9.  Pay special attention to saddles or high draws which are secluded from the rest of the forest, yet close enough to its resources.

10.  Look for a place you would like to set up camp if you were being pursued by enemy forces. More specifically, a place where others would not WANT to go; an inconvenient place; a place where there is BOTH cover and concealment; a place with multiple exits as well as avenues of approach which are all easy to monitor. Also make sure that the position would be hidden and concealed in both winter and summer. And finally, make sure the position is defensible if you have to make a stand there.

12.  Imagine you are tracking a special forces detail well educated in survival and evasive maneuvering. They would avoid ridge tops or hill crests, yet they would maintain an elevated position or vantage point where they could monitor all traffic in and around their location within 1000 meters.

13.  Figure out where the animals drink and bed at night. Ask yourself, Where would I set up an ambush if I had to use a knife or a club to kill prey ?

14.  Look for odd stick or rock structures. These are used to communicate and seem to be in avenues of travel.

15.  Look in areas where free grazing livestock often turn up missing or dead. (These areas are often posted on the web)

16.  Go to places with RECENT sightings/activity, or that locals avoid for superstitious reasons. Take note of places you feel watched. Pay attention to your gut. Is there a lookout over this area? Is it a good habitat?

17.  Focus on areas with high precipitation and/or lots of water and vegetation.

20.  Search for tracks along river banks or in river bottoms. If you find a track in the mud, congratulations, you are in an area that is currently active. Follow cautiously. Above all, try to identity patterns with tracks. What direction are they going? Why are they in that particular location? Fishing? What do the tracks indicate? Running? Crouching?

21.  Keep an eye out for unusually large piles of “bear scat”.

22.  If staying over night, set up a dummy tent. Keep a small light on within the tent. Leave some inconspicuous, quiet, audio playing on a loop inside the tent, like people talking sporadically. Meanwhile stay in a well protected blind in a tree, and be sure to be silent and cover your scent.

23.  If you use cameras, make sure you also have goggles which allows you to see what the camera sees via wireless transmission, so as to not put yourself in harm’s way. I’m always a fan on aerial thermal images and goggles, but make sure the drone is high enough to muffle its own noise. Small weather balloons may work just as well.

24.  Remember that Bigfoot are curious and cautious. 99% of the time they are only interested in observation or recon, especially on the first night. They generally approach and leave silently and stay at least 150 meters away. Remember that they continue to use cover and concealment even at night. Also remember that they use the “castle and moate” strategy when they approach, meaning that they make sure to keep physical barriers between you and them. So they are likely to approach from the opposite side of a large car or pond or bush.

25.  Keep in mind that they usually hunt and perform recon in twos, threes, and fours. They space themselves out and flank, usually forming a diamond shape. They keep the object of interest in the center of their formation to maintain strategic advantage. They also use blinds and decoys. They may also try to direct your focus to an area by throwing rocks or making noise. This may be so one can silently inch closer or so they can gauge your level of aggression. Determine the threat you pose. So keep your camera on a swivel, regardless of where the noise is coming from. (In fact, if you start to hear noises, that’d be a good time to launch your drone.)

26.  Avoid infrared lights and IR cameras. To them infrared light may look like a bright, obnoxious spotlight in the woods. It may even irritate their eyes in the same way black light bothers human eyes. Their eyeballs are MUCH larger than ours, and therefore contain at least twice the optic nerves. It is very likely they can see more light on both sides of the spectrum.

27.  Take powerful monoculars that can record video. That way, you can get clear footage of tree peekers, even from hundreds of meters.

29.  I understand that “gifting” is extremely hazardous as a normal practice, but from a research perspective it is a gold mine of information. If you can achieve any sort of predictable interaction with these animals, you have taken a giant leap forward. I encourage serious researchers to pursue ANY approach that results in genuine interaction. If we can predict where they will be, plus or minus 72 hours, the rest is just a matter of using the right technology to capture HD aerial footage.age. After that, following a heat signature from high altitude is easy.

Thus far S O B TM  members have accumulated more of a series of first hand experiences (rock throwing, vocals, infrasound) as opposed to hard irrefutable physical evidence (like most, but not all researchers!) though tracks and tree structures have been located. These experiences however are what continue to fuel our curiosity, propagate our interest and temper our resolve to capture the necessary evidence required for species recognition by the scientific community.

Captured trail cam images of portions of an undetermined animal. These images were captured during an overnight vigil near our camp at approx 4:50 am. By early the following morning (6:00am) all bait had been taken and an apple had mysteriously been placed directly in the middle of the path we had used to enter the site and near a gifting site. On other occasions at this same location we have found stick structures,rock formations, tracks as well as had a rock throwing incident very late one evening.
Let us know your thoughts at seekingontariosbigfoot@gmail.com